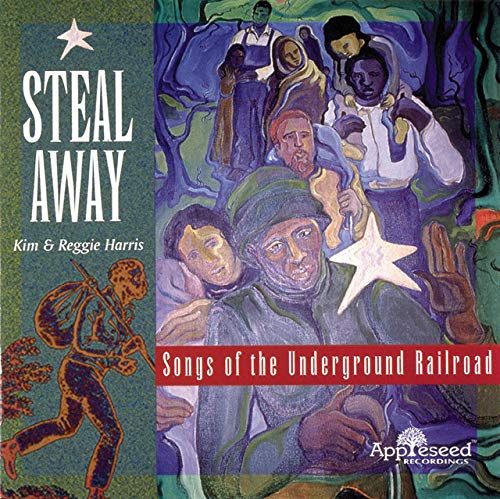 Kim amp; Regie Harris are a treasure trove of traditional, historical and contemporary African-American acoustic music. This album delivers an epic and stirring collection of folk blues and spirituals from the days of the Underground Railroad, the great viaduct of freedom during slavery times.

"...A rich legacy of African-American folk songs...beautifully rendered by Kim and Reggie Harris on this stunning recording." -- Sing Out!, Summer 1999

"Stirring performances...rendered with deep emotion and sensitivity...A collection with historical and emotional impact." -- All Music Guide

With talent, creativity, idealism, and over 25 years of experience in performing, recording and teaching on their resume, Kim and Reggie Harris are the consummate modern folk musicians. Whether entrancing folk festival crowds with their repertoire and warm harmonies or dramatizing underground railroad songs for schoolchildren in classroom workshops, the duo continues the folk tradition of preserving important songs from the past and adding meaningful, new compositions that reflect the world around them.

Born and raised in Philadelphia, PA., both Kim and Reggie were exposed to a wide range of musical styles and approaches throughout their childhoods. They met at a summer camp in 1974 and continued their friendship as fellow students at Temple University. As their relationship deepened, they combined their vocal and instrumental skills (both sing, and Reggie is an adept, expressive guitarist) and started performing in local Philadelphia clubs and coffeehouses. They were married in 1976, and by 1980 had hit the road in an ongoing tour schedule that still averages more than 250 dates a year.

Writing songs together, separately, or with other musicians, the Harrises have never lacked for material or subject matter. Their compositions have dealt with ever-relevant topics such as politics ("Big, Big World," "Read the Lips"), domestic violence ("Crack in the Wall"), the family of man ("Spoken in Love"), the joys and sorrows of love ("Sweetness of Your Smile," "Four Walls"), and a constant theme of social activism. Their lighthearted paean to automobile seatbelts ("Passive Restraint") has been featured on National Public RadioÂs "Car Talk" program.

As their live shows and albums illustrate, the Harrises are adept at recognizing good songs by other writers and making them their own. Besides recording classic compositions by folk deities like Pete Seeger and Phil Ochs, Kim and Reggie have also adopted obscure gems like Chris FarrellÂs "The Stars that DidnÂt Shine" (about Negro League baseball players), David RothÂs idealistic "Earth," and roamed even farther afield to cover "Woyaya" by Osibisa, an African rock band of the Â70s.

The HarrisesÂ cultural background as African-Americans is a major component of their repertoire. Spirituals and gospel songs are liberally represented in their work, and they are well respected in scholastic circles for their presentations on black history for teachers and students alike. Their best known album, "Steal Away: Songs of the Underground Railroad," serves as the backbone of their "Music and the Underground Railroad" workshops and can be found in museums and libraries around the country. They also present programs for teachers entitled "Dream Alive! A Celebration of Black History" and "Music of the Modern Civil Rights Era." Their latest project is a one-act opera for student and family audiences entitled "Friends of Freedom: An Underground Railroad Story."

Kim and Reggie and their frequent recording and performing companions Greg Artzner and Terry Leonino, better known as Magpie, have also contributed to all three of the Appleseed labelÂs tributes to the music of Pete Seeger Â "Where Have All the Flowers Gone," "If I Had a Song" and "Seeds."

Whether appearing at the Kennedy Center for the Performing Arts, the Philadelphia Folk Festival, or P.S. #187 right down your street, Kim and Reggie Harris have established a strong identity in todayÂs musical and sociopolitical environment. As all of us should strive to become, they are part of the solution to the worldÂs ills Â a balm for the troubled, an inspiration for the tired or apathetic, a musical force for positive change.

Free delivery on all orders over £50
Trustpilot

Drizzle, splash & stir in the flavour

Add an explosion of flavour to your food with our unique collections of olive oils and balsamic vinegars.

Improve the good, enhance the great and savour even the simplest of meals with our family made olive oils and balsamic vinegars.
Discover new levels of food enjoyment.
A taste for anyone. A taste for anytime.

Traditional or infused, savoury or sweet, our superb range of balsamic vinegars deliver a taste experience like no others.

The Gift of Oil brings your food to life in the simplest of ways.
Love Food. Love Flavour.

Incredible on their own and even better together. Our oils and balsamics perfectly compliment each other! Lemon oil with Mango & Passionfruit balsamic. Basil oil with Sundried Tomato balsamic. Lime & Chilli oil with Garlic & Ginger balsamic…Use together to take food enjoyment to mouth-watering new heights!

Fancy building your very own Gift of Oil collection and making BIG SAVINGS too? Take a look at our fantastic bundle offers to find out how..... the more bottles you order the bigger the savings to be made!

Drizzle, splash or stir our exceptional oils and balsamics into all sorts of dishes to make everyday food taste great and good food taste fabulous!
Fall in love with flavour.
Find out how it all started right here.

Drizzle over, splash on or stir through our exceptional olive oils and balsamic vinegars, discovering new levels of food enjoyment. Fall in love with flavour with The Gift of Oil.

Our little book
of inspiration

Download our little book of inspiration.
It's jam packed full of ideas to take your everyday meals to another level!
Enjoy amazingly tasty food every day!

Richer, thicker and more intense than our Classic balsamic, our Reserve adds a splash of sophistication to any dish.
Superb over sea bass, salmon, blue cheeses and brie, field mushrooms or thick juicy steaks!

Mellow, fruity, low in acidity and absolutely ideal for everyday use.
Perfectly balanced, well rounded and simply delicious!
When mixed with our Sicilian oil makes an unbelievably gorgeous GO TO salad dressing!

Our most popular infused balsamic is wonderful on it's own over feta, goats cheese, Greek yoghurt, strawberries or ice cream.
Totally delicious too when mixed with one of our citrus oils as a salad dressing or as a yummy dip with fresh bread!

Fresh, green and grassy, our best selling oil is like "Summer in a bottle!"
Simply drizzle it over anything - meats, fish, seafood, vegetables, salads, soups....you can't go wrong!

Lovingly made by cold pressing freshly picked lemons together with selected Cerasuola olives and then gently infusing the oil created with the zest of additional fresh lemons.
Delicious over fish, chicken, prawns, crab and crushed new potatoes!

Take a look at our extensive library of recipes for simple, mouth-watering examples of how to use our olive oils and balsamic vinegars

Come along to our exhibitions at food festivals across the the UK. Sample products, ask the experts and let us show you how to easily transform your dishes.

*UPDATE* Unfortunately, due to the current Covid – 19 pandemic, all our events in 2020 have had to be cancelled.
We were hopeful that some of our Christmas shows and markets would still be allowed to go ahead but sadly this has not transpired.
We really do miss doing them and meeting our wonderful customers, some of whom we have serviced this way for 20 years now!
Let’s hope things get back more to normal next year and in the meantime not to worry, you can still order all of our products online as per usual!
HURRAH!

What people are saying

Trustpilot
Do NOT follow this link or you will be banned from the site!