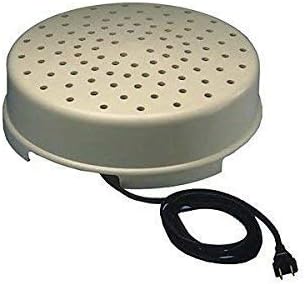 Air-Dryr is an inexpensive and effective way to fight moisture problems, cold drafts, and corrosion. Designed to operate anywhere, 24 hours a day. Place Air-Dryr on the floor in any damp, enclosed space and plug into a 110/120 volt outlet. The damp air is heated to the point moisture is held in suspension (above dew point), then released through the top vents of the device. As warmed air rises, cooler damp air is drawn in, where it too is heated. Air-Dryr costs no more to operate than the burning of a light bulb. A thermal cutoff turns the unit off should air flow be impeded. Attractive, neutral beige housing made of polycarbonate for strength and durability Slim and stable Can be placed out of the way in confined spaces Handles a high volume of air Designed to be left on 24 hours a day Safe to the touch Low operating cost Trouble free No switch, fan, or thermostat; uses natural convection to circulate the air Silent operation Safe for marine use No components which cause sparking UL listed